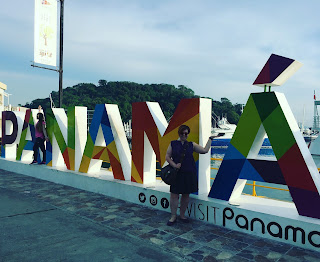 Friday, June 2nd "Are you going to the canal??" That was the first question anyone asked when we announced we were going to Panama.  It makes sense, really.  Panama is really known for the canal. Except for me.  I knew the Panama Canal was a thing .  But I didn't entirely understand what kind of a thing it actually was. The day before our cruise, we spent a day in Panama City.  It rained and we honestly didn't get a full feel for the city.  As much as I will say we can have a great day despite the rain, it's always a lie.  Rain changes everything and makes you hate the world.  But you put on a brave face as long as you can and you try to duck into buildings and take long lunches to wait out mother nature. You might also have to wear a poncho. We ducked out of the rain and into the Panama Canal Museum in the Old Town district of San Felipe of Panama City.  Adele and I had scoped this out a few days earlier as we Ubered it to meet a former co-worker
Post a Comment
Read more 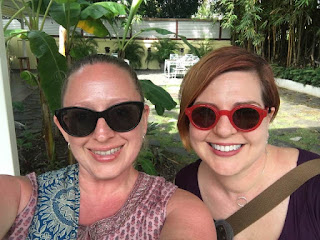 June 1st, 2017 When Adele and I travel, one of our first pieces of research is the San Pellegrino’s Top 50 Restaurants site.   If a restaurant is on the list, there’s a reason for it to be there.   Whether a restaurant is #5 or #50 doesn’t really matter.   The restaurant is On. The. List.   And i t gives us a place to start in a city . Panama doesn’t have any restaurants on the Top 50 list.   But on the Top 50 Latin America list, Panama’s entry is at #36.   And we were going there for lunch. The post-dining glow. It could be because of the wine. Maito is located a bit off of one of the main drags in Panama.   We spent most of our time in Casco Viejo, so we called an Uber after hiding in the Panama Canal museum during a rainstorm.   We could have taken a train to a bus.   Or we could have taken a bus.   But I’m not great at busses.   And it was $7 to Uber halfway across the city to the restaurant.   It wasn’t really even a choice.   We were running a little late due
Post a Comment
Read more 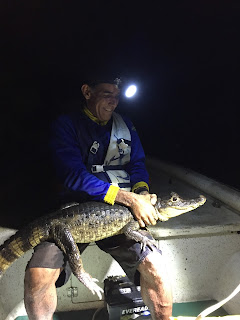 May 29th, 2017 Adele and I were the only overnight guests during the second night of our stay at the Jungle Land Lodge.   While it might seem creepy, it ended up being pretty fantastic to be there solo.   We could do what we wanted when we wanted.   And the excursions were set to our level of fun.   Even if our level of fun was to nap in a hammock with a glass of wine in hand. On our first night we were taken on a night safari after dinner.   We didn't know what to expect on a night safari.   Adele and I piled into an open-air boat and drove out into the night.   Captain Carl found a few baby crocodiles and the sky opened.   I donned my Walt Disney World poncho and was a bit miserable, because poncho (I hate ponchos).   I was still ready to go out a second time.   But I not so secretly hoped I wouldn't need the poncho again. Luiz was our guide for our second night.   Where Captain Carl was snarky and lackadaisical (which is not a bad thing. It's kind of how I liv
Post a Comment
Read more
More posts